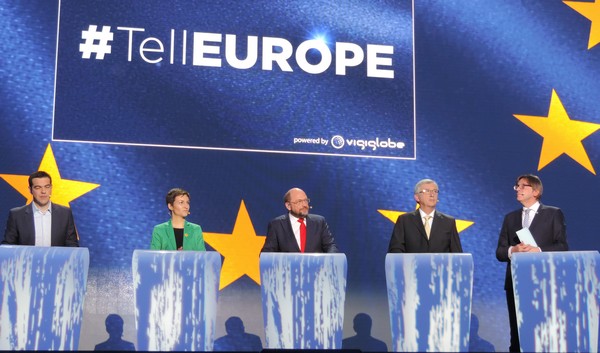 The debate between the five candidates for the presidency of the European Commission that took place on May 15 in Brussels, although a small scale political event, was an important step in the gradual emergence of an embryonic common public sphere in the EU. So far the non existence of such a sphere is not only due to low viewership of pan-European media such as Euronews, or the inadequate coverage of EU news from the national media. The main problem, especially in peripheral countries such as Greece, is the blatant mismatch between the strong presence of European institutions (Commission, Council, Central Bank) in national political arenas and the their simultaneous lack of democratic legitimacy. In other words, while unelected European officials express opinions and adopt policies with significant impacts on our lives, we, as European citizens, cannot exercise direct democratic control over them.

The specifics of #TellEurope
In this regard the debate that was organized by the European Broadcasting Union (EBU) in Brussels, despite the inherent weaknesses of the project was interesting in many aspects.

First, the five candidates, Alexis Tsipras (European Left), Martin Schulz (Progressive Alliance of Socialists and Democrats), Ska Keller (Alliance ’90/The Greens), Guy Verhofstadt (Alliance of Liberals and Democrats for Europe), Jean-Claude Juncker (European People’s Party), represented the main political trends in Europe, except for the extreme right, for which we are to vote on May 25. There was therefore a match, even indirect, between the protagonists of the debate and the stake of the European elections.

Second, the candidates were forced to defend the distinct role of the European Commission and Parliament against the Council of Heads of Member States which, being mainly under the control of Germany, exercises power de facto in the EU without the appropriate democratic legitimacy.

Third, the televised debate had two original features: it was meant to address all Europeans at the same time – which is very rare and happens only for non-political events such as the Eurovision song contest for instance – and was designed for simultaneous commentary on the internet.

The discussion on Twitter
According to the EBU, the debate was broadcast simultaneously in 28 countries of the EU by 55 TV channels, 88 websites and nine radio stations. In fact, there was little major media that broadcast the event. For example, in France it was two public channels of the Assemblée Nationale and the Senate respectively, with minimal viewership, and a 24h news channel, iTélé with a market share of approximately 1%. Participation in the online commentary was also relatively low notwithstanding EBU’s promotion efforts like advertising the hashtag and hiring a company offering detailed analytics from Twitter during the debate. 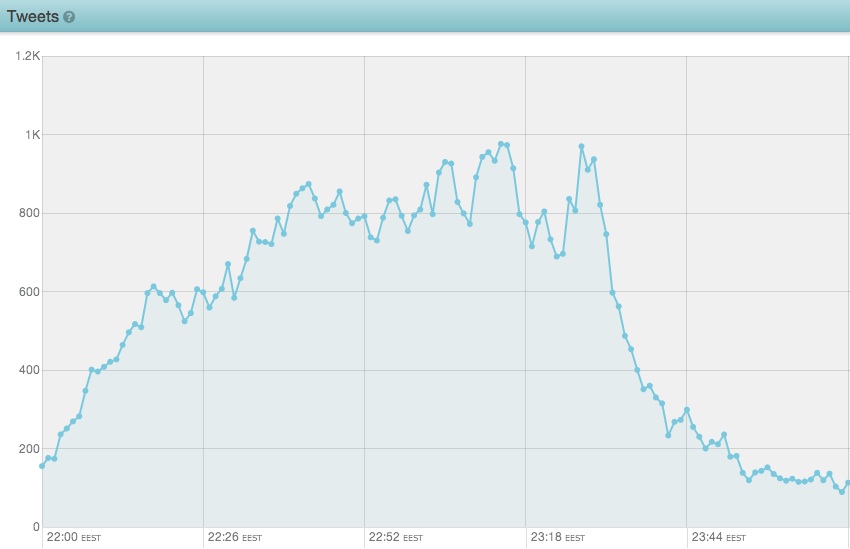 Indeed, in the two hours that followed the beginning of the broadcast, fewer than 20,000 users sent approximately 75.000 tweets containing the official hashtag. Comparatively, the Eurovision song contest held on May 10 produced 875.000 tweets with #eurovision within 24 hours (Source: Topsy). The number is very small if one considers the fact that the election concerns 500 million Europeans, of which more than 20 million Twitter users.

However participation in the Twitter discussion doubled compared to the previous debate organized by the University of Maastricht, as shown in the table above, showing an upward trend. So despite the small scale of the livetweeting that evolved around # TellEurope it offers an interesting field of observation because it is one of the rare cases where a political event creates an international debate in the European web that is circumscribed in time and structured around a central hashtag.

Network analysis of the Twitter discussion
The first trend that one observes through in the graph of #TellEurope is that political differences and affinities of the candidates clearly reflected in the structure of the debate that took place on Twitter. As shown below, each of the candidates formed a distinct community around his/her official account. 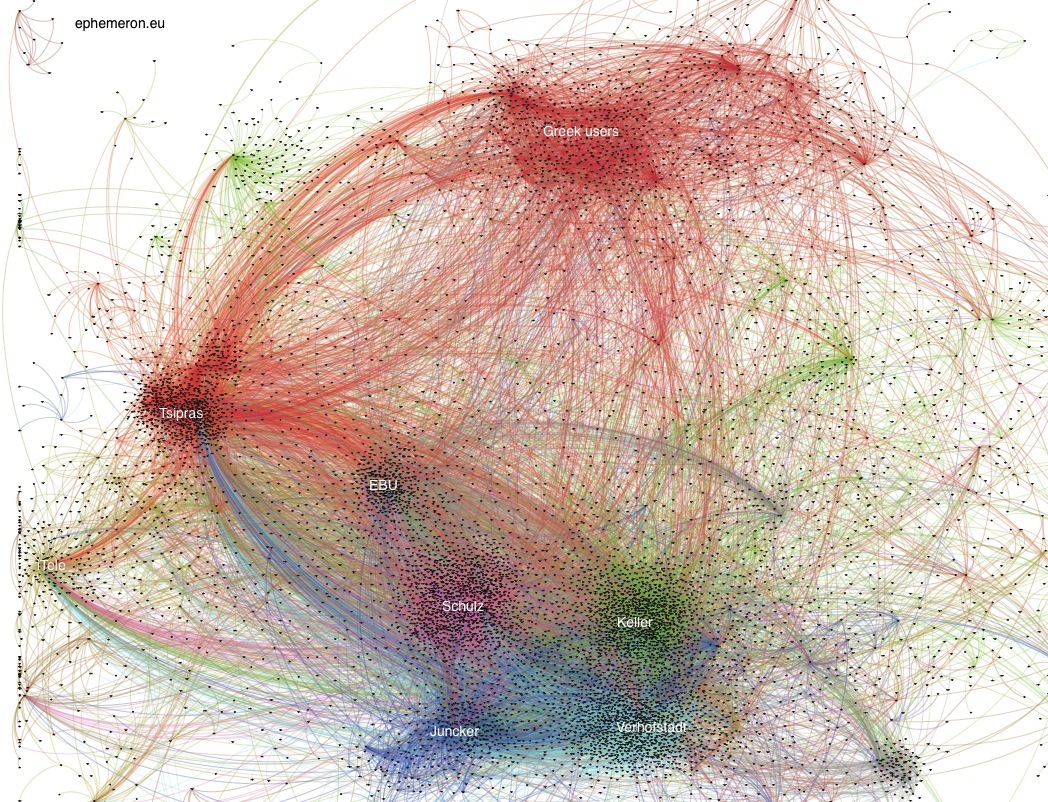 Explanation of the graph: the dots correspond to Twitter accounts that used #TellEurope from 21h20 on 15/05 until 9h51 on 05/16/2014 (total of 30.000 tweets).The lines between the dots represent the interactions between them (RTs and mentions). The topology of the graph is the result of interaction intensity between accounts. The more two accounts are characterized by bidirectional communication between them, the closer they are on the map. The size of the dots (from smallest to largest) depends on the number of RT and mentions received. The colour depends on the community to which they belong. (Here you can download the entire map in pdf format for better resolution).

The structure of interactions between these communities (RT and mentions), reflect for example the particularity of the community of Alexis Tsipra compared to the other candidates. While all four communities (Schulz, Keller, Verhofstadt, Juncker) are relatively close and connected enough to each other, the community of Tsipras interacts only with those of Schulz and Keller. Simultaneously the community of Tsipras strongly associates with another sizable set at the top of the graph in red, whose more active members are Greek users. This means that the mobilization of the Greeks of Twitter was far greater than it was in other countries, something natural if one takes into account the intensity and the stakes of the election in Greece. This is confirmed by the geographical origin of the user as shown below (Source: Topsy). 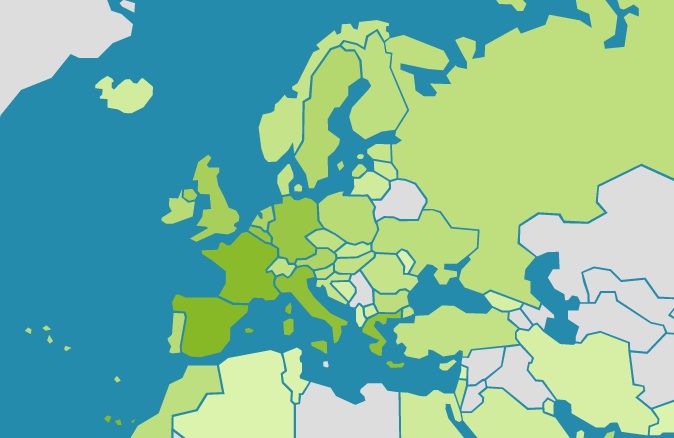 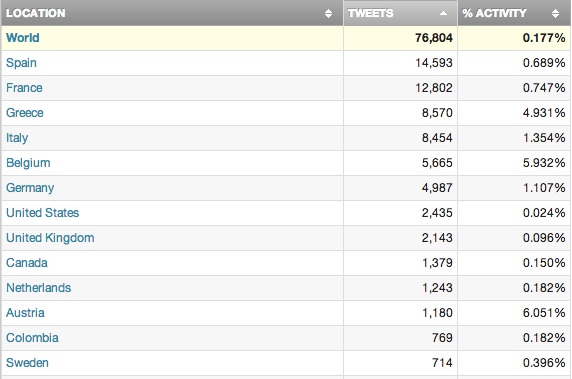 The list above shows clearly that greater participation in the discussion came from southern countries such as Spain, France, Greece and Italy. Its precisely the part of Europe where the debate over the economic policies inside the EU is the most intense. In contrast, there was low interest in Germany and even lower in the Netherlands, in Great Britain, in Scandinavia as well as in Central and Eastern Europe. If one takes into account the fact that Greece has the smallest population of Twitter users among the four most active countries, confirmed the overrepresentation of Greeks in the sample.

The admittedly good presence of Alexis Tsipras together with the dynamic presence of the Greek users in #TellEurope explain the fact that he was the most discussed candidate on Twitter, as evidenced by the data reported by the EBU through the company Vigiglobe.

Tsipras and Keller were also the ones who gathered positive comments from journalists and observers. This is evidenced by the fact that the share of voice of those two candidates rose sharply on Twitter on the morning of May 16, as shown in the table below, which corresponds to the media coverage of the following day.

The success of Tsipras, and to a lesser degree of Keller, is notable because their rivals have much more important resources that they use in order to increase their influence online. For example, Schulz and Juncker have qualified staff engaged in community management and have already made significant advertising campaigns on social networks such as shown below.

Conclusion
The overall conclusion is that the debate around #TellEurope on Twitter was naturally affected by the dynamics of the political developments in Europe and the specifics of the communication coverage of the event. In other words, the representatives of the alternative Left and mainly Tsipras benefited from the growing popular demand for an end to austerity policies, for growth and job creation that stems from the economic and social crisis that has plagued mainly countries of southern Europe.

Specifically in regards to Greece, the highly-charged political confrontation between government and opposition and the national character of the election prompted a large number of users to participate, in an organized manner or not, in commenting the televised debate. Also the two young candidates of the Left benefit from age factors giving them strong influence in groups of Europeans with specific characteristics (young, highly educated but not necessarily well off, intensive users of the web and active consumers of news) that are overrepresented among Twitter users.

But the prevalence of specific candidates in this dynamic has implications for wider layers of the population in Europe as shows this chart from Google. In the past 30 days the name of Alexis Tsipras was the most searched compared to all other candidates and got even more searched after the debate. Ska Keller who was mostly unknown literally exploded in May 15.

These figures clearly not foreshadow the outcome of the election. They are however indications of the dynamics of the campaign when it come to specific parts of the population. They also confirm the idea that having lot of budget is clearly a key competitive advantage for an election campaign, but which may be balanced by a spontaneous mobilization and/or strongly politicized participation.

Thanks to Pavlos Kazakopoulos and Yannick Rochat for assistance in collecting the data. I used TwitteR, Topsy, Vigiglobe and Gephi.

One thought on “#TellEurope: an analysis of the Twitter coverage of the Eurovision debate”