The European election of May 2014 was a political event of great magnitude, contrary to the tradition of such elections going relatively unnoticed. As I’ve shown earlier, the economic and social crisis in many European countries as well as the particular institutional and political context (coordinated campaigns of European parties, debates between candidates for the presidency of the European Commission etc.) have fuelled interest on behalf of a large number of citizens.

This renewed interest in the European election is visible in the tables below. After thirty years of steady decline in the participation rate, 2014 marked a trend reversal. Even if the raise of the participation rate is modest on average for the 28 EU members, it is much more significant in some countries like Germany, France, the Netherlands, the United Kingdom, Spain and Greece. 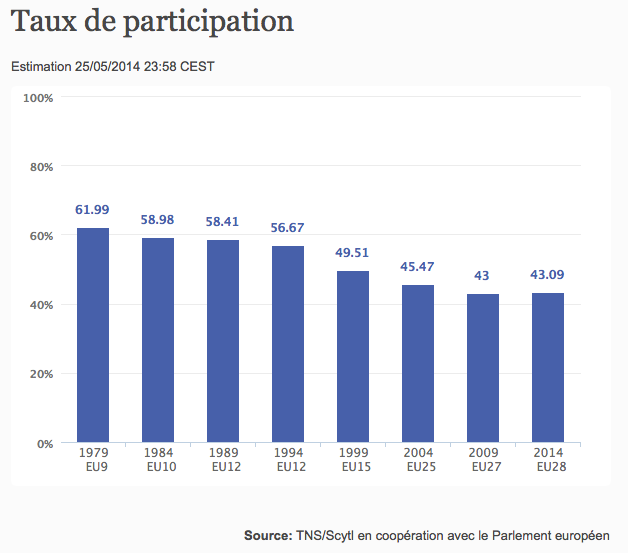 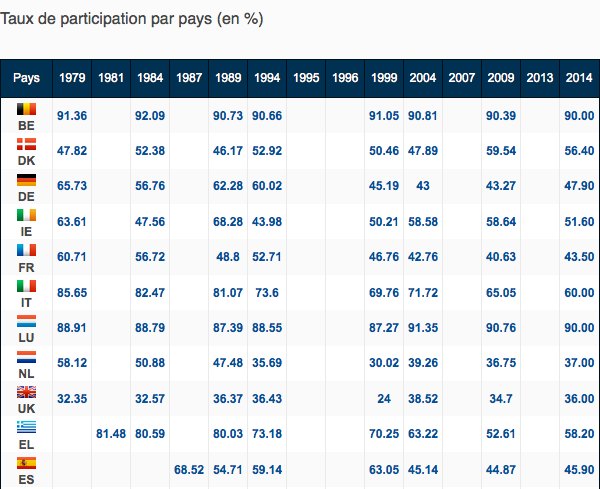 The groups that have traditionally dominated the European Parliament (People’s Party, Social Democrats, Liberals, Greens and Conservatives) all lost votes. The winners are on the one hand the party of the European Left that wins an additional 7 seats and almost 1% more votes than in 2009 and whose symbol is the victory of SYRIZA in Greece , the party of Alexis Tsipras. On the other hand the xenophobic and populist extreme right triumphs with the highlights being the victories of the Front National in France and the UKIP in the UK. The third major event at a European level is the victory of the Democratic Party and its leader Matteo Renzi in Italy. 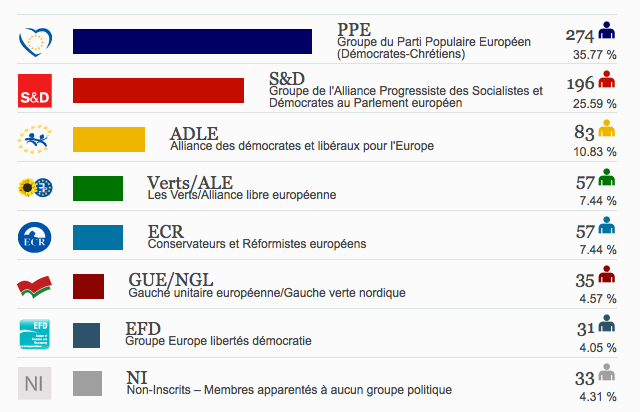 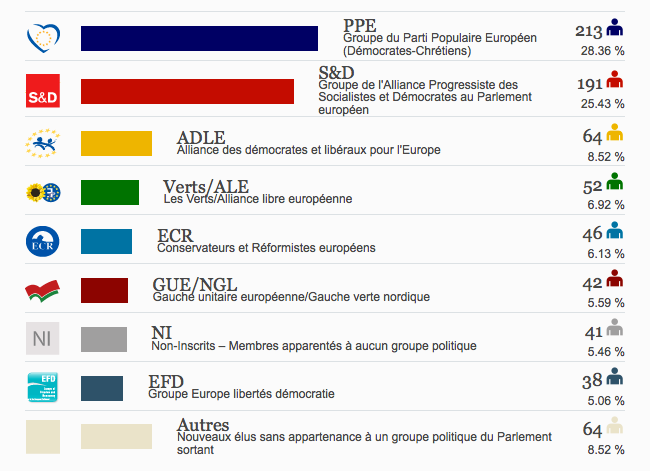 Another feature of the election was the relatively large debate it generated on the web in general and on Twitter in particular. Indeed, the 2014 European election, like the 2012 presidential elections in France and the United States, saw the rise of Twitter as a “thermometer” of public opinion on the web. Despite the criticisms that can be addressed to such an idea, mainly because of the non-representativeness of its users, one still must recognize that Twitter is a popular medium with parties, candidates but also with media and journalists. It is also an important means of expression for the fringes of the younger, educated and politicized Europeans that intensely use digital technologies.

At a European level, the 2014 elections confirmed the trend towards an “institutionalization” of Twitter. Indeed, many institutions (the European Broadcasting Union, the European Parliament, the Commission, European parties) have established online communicational devices in which Twitter was central: official hashtags, use of specialized companies that provided analytics, integration of special modules monitoring reactions on Twitter on their websites, promotion of Twitter accounts and hashtags on other media). Everything has been put in place to make Twitter a standard support for synchronous discussion over the electoral process as shown in the screen shot below from the dedicated website of the European Parliament. 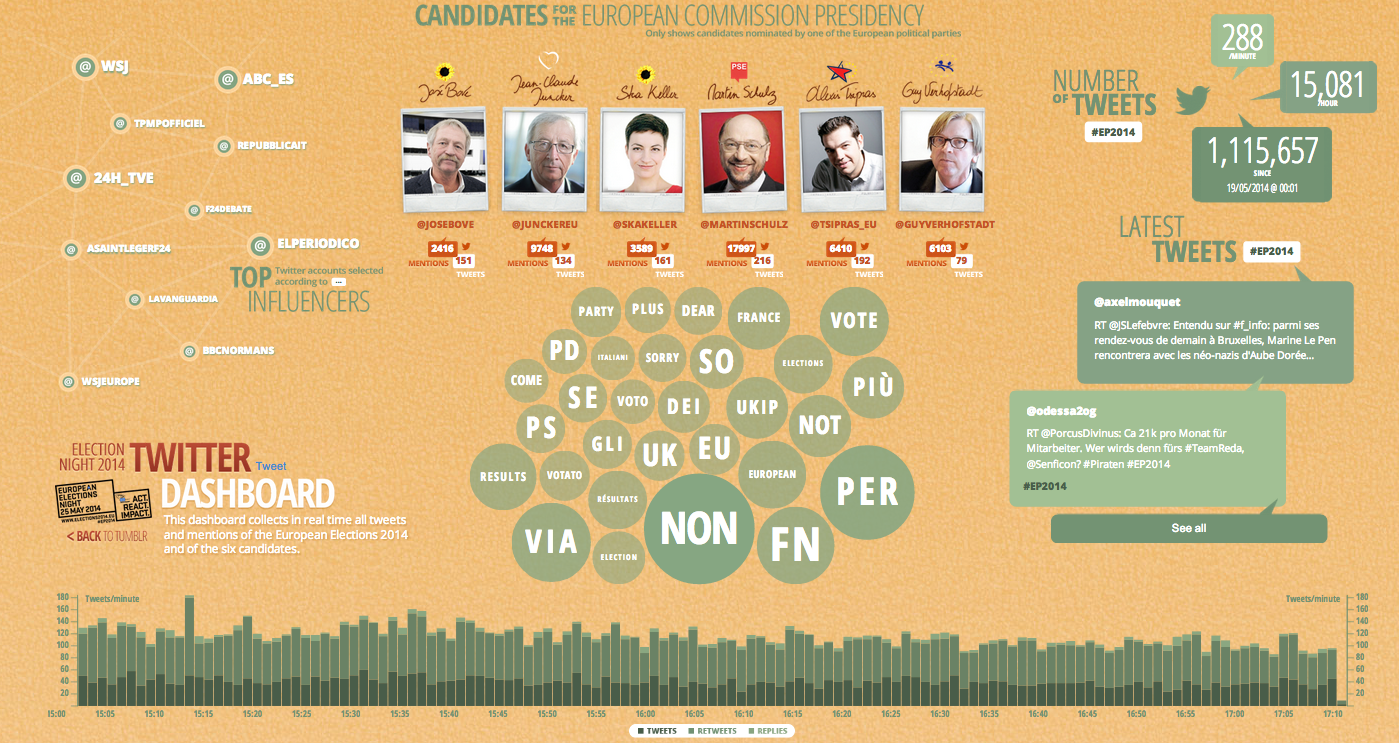 The result of this is that participation in the debate around the #EP2014 hashtag was relatively large. According to Topsy, during the month of May over a million tweets containing the hashtag were produced, which is half of those of the Eurovision song contest but ten times those sent during the debate between the four candidates for the presidency of the Commission held on May 15 (#TellEurope ).

From my point of view this is a positive development for the potential of Twitter for collecting and analysing data on this type of political events is vast. In the specific case of the European elections, the establishment of the official hashtag #EP2014 has enabled aggregation of national discussions around a central virtual gathering point. So, the graph of the network that is created around this hashtag is fairly representative of the structure of the debate that took place on Twitter. 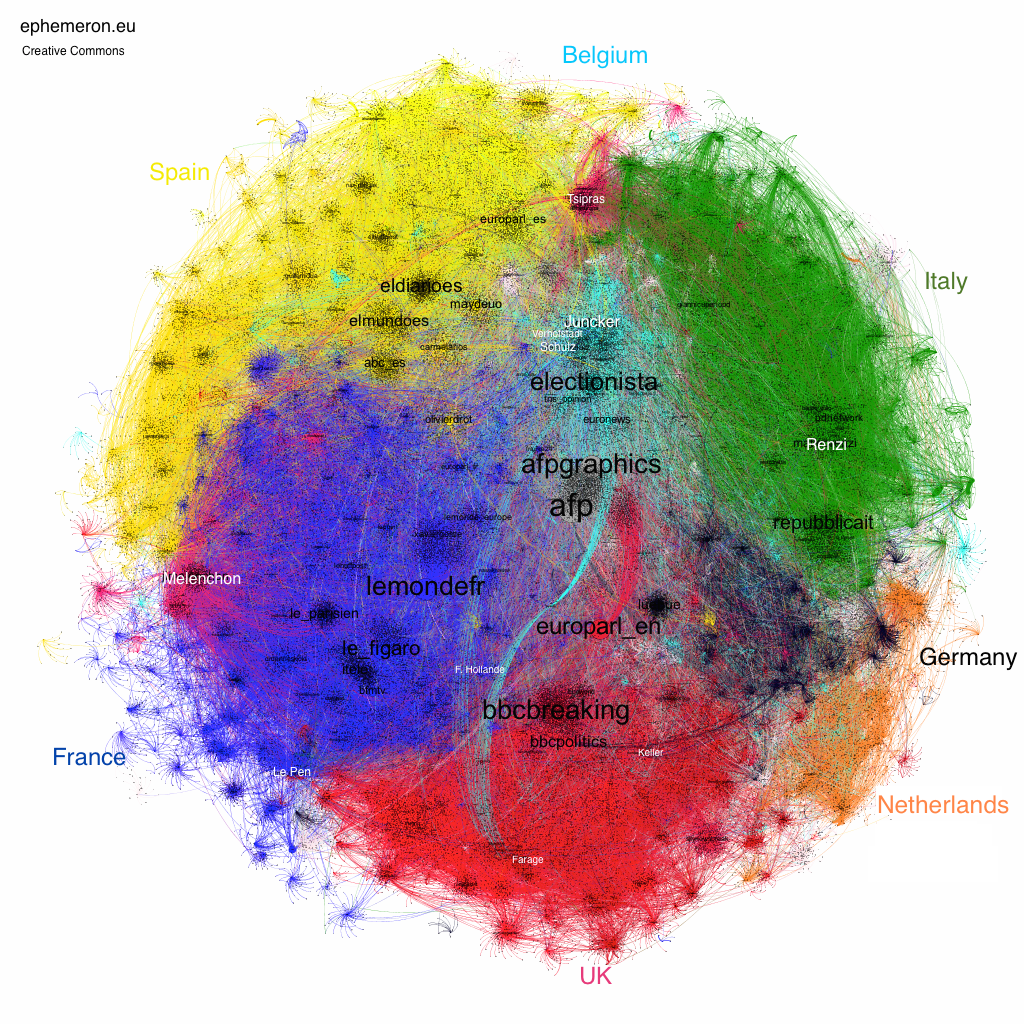 Explanation of the graph: the dots represent Twitter accounts that produced a message with the list of hashtags related to the election. The lines between the dots represent the interactions between these accounts (RT and mentions). The topology of the graph is the result of the intensity of interactions between accounts. The more two accounts are characterized by an intense two-way communication between them, the closer they are on the map. Dot size (smaller to bigger) depends on the number of mentions and RTs received. The colour depends on the community to which they belong. The data was collected with DMI Twitter Analytics The graph was made with Gephi using the Open Ord algorithm.

The graph above was produced from a sample of 346,000 tweets by 138,873 different users including a series of hashtags related to the European elections (#EP2014 but also others, including those used by the four candidates for the presidency of the Commission). These tweets were collected between May 25 (0:00 ) and May 27 (11:59 p.m.).The sample thus includes Election Day and the following 48 hours when the main use of the hashtag took place, as it appears below (Source: Topsy).

A discussion structured by country

The first observation that can be made from this graph is that the discussion was organized by country, something that is not counterintuitive. We clearly distinguish seven major groups of accounts which correspond to distinct networks of interactions between users from Belgium (light blue in the center), Italy (green), Germany (black), the Netherlands (orange), Great Britain (red ), France (blue) and Spain ( yellow). This classification is not made from geolocation but depending on the nationality of the main nodes of each network that was manually verified. There are sets of transnational interactions in the graph, such as the linking between the accounts of Alexis Tsipras to that of Leftist French leader Jean-Luc Mélenchon. But overall the most important determinant for interaction intensity is that of the country of origin.

The importance of these countries in the discussion of the European election is confirmed by the list provided by Topsy. Indeed, users from France, Italy, Spain, Great Britain, Germany and Belgium are in the top 10 for usage of #EP2014 between 25 and 27 of May.

The central role of media and politicians

The second point that can be made is that the media play a central role in the discussion because they are the most mentioned and retweeted accounts. In addition to the accounts of the AFP that lie at the heart of the graph, these media accounts are in order of importance Le Monde, Le Figaro, Le Parisien, iTélé and BFMTV in France; BBC in Great Britain ; El Mundo , ABC and Eldiario.es in Spain; La Repubblica in Italy. International players such as Euronews, TNS Opinion and Electionista are also much cited, especially in the subset of Belgium, which in fact corresponds to the overactivity of European officials and EU employees that are based in Brussels. This trend is confirmed by the list of the most linked pages in tweets with the hashtag #EP2014 over the same period. 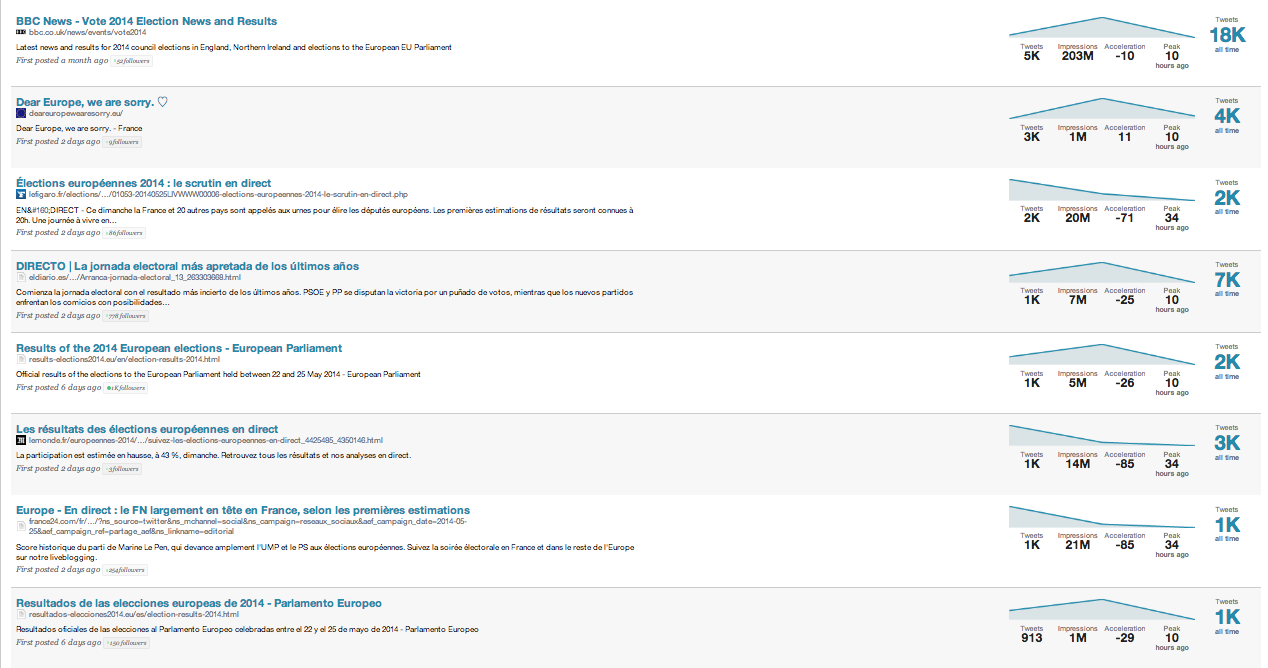 The presence of official accounts of politicians in the graph is also interesting to observe. The most mentioned and retweeted official accounts are in order of importance those of Jean-Claude Juncker, Matteo Renzi, Jean-Luc Mélenchon, Martin Schulz, Marine Le Pen, Beppe Grillo, Alexis Tsipras, Nigel Farage, François Hollande, Ska Keller and Guy Verhofstadt . We see a mix of European politics, with the presence of the four candidates for the presidency of the Commission, and national politics with protagonists such as Renzi, Le Pen and Farage. France is particularly well represented partly because the shocking victory of the Front National has provoked sharp exchanges and complaints against politicians such as Mélenchon and Holland.

It should be noted that the importance of politicians’ accounts in the graph is partly consistent with the classification of Vigiglobe above, even if the methodology is different (the graph uses the number of mentions and retweets of accounts present in the sample, while Vigiglobe counts the number of quotes of the name of a predefined list of politicians in a broader sample of tweets, which may explain the absence of Le Pen, Mélenchon and Farage of the list). 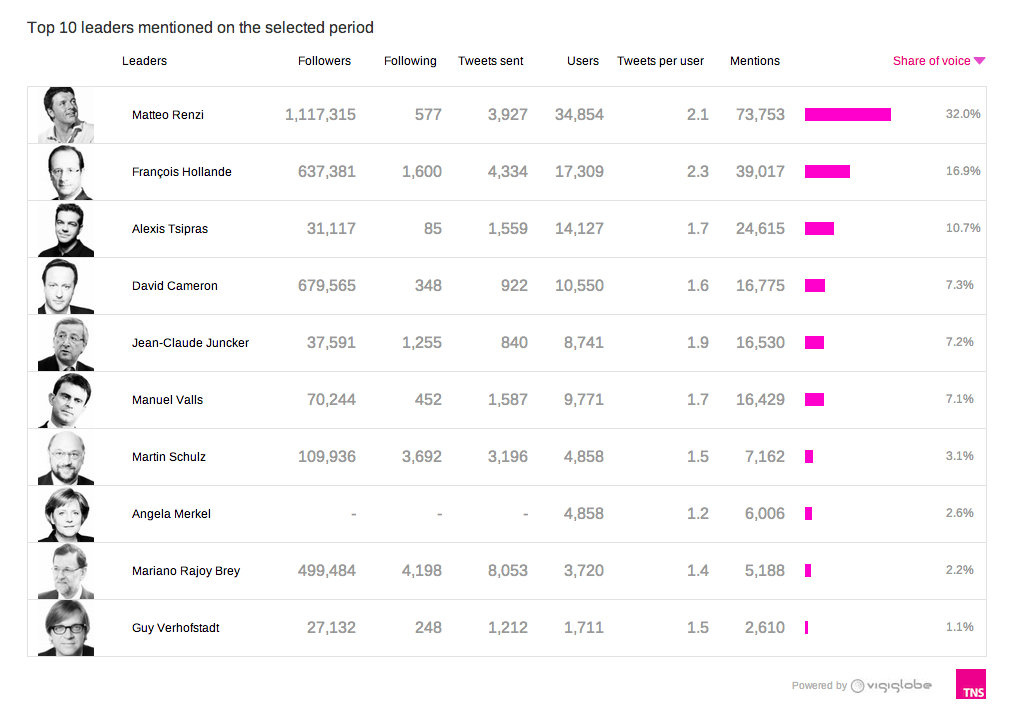 We can conclude from the foregoing that the political discussions on Twitter are structured on the basis of national affinities, including when it comes to an international event such as the European elections. Nevertheless we can see the emergence of a European public sphere online that, while embryotic, starts to be consistent based on political networks, media and EU institutions.