The victory of SYRIZA in the Greek parliamentary elections is unquestionably a major political event. Given the current political environment, characterized by the rise of protest against austerity policies that are imposed within the EU, the elections in this small peripheral EU country have taken an importance surpassing by far its, nevertheless dramatic, domestic issues.

As I showed in previous posts, the study of Twitter clearly reveals the importance and dynamics of political events of international dimension. Twitter users are of course far from being representative of the whole population. Nevertheless, the overrepresentation of media, journalists and highly politicized individuals among its users makes this tool a vantage ground for this kind of analysis. 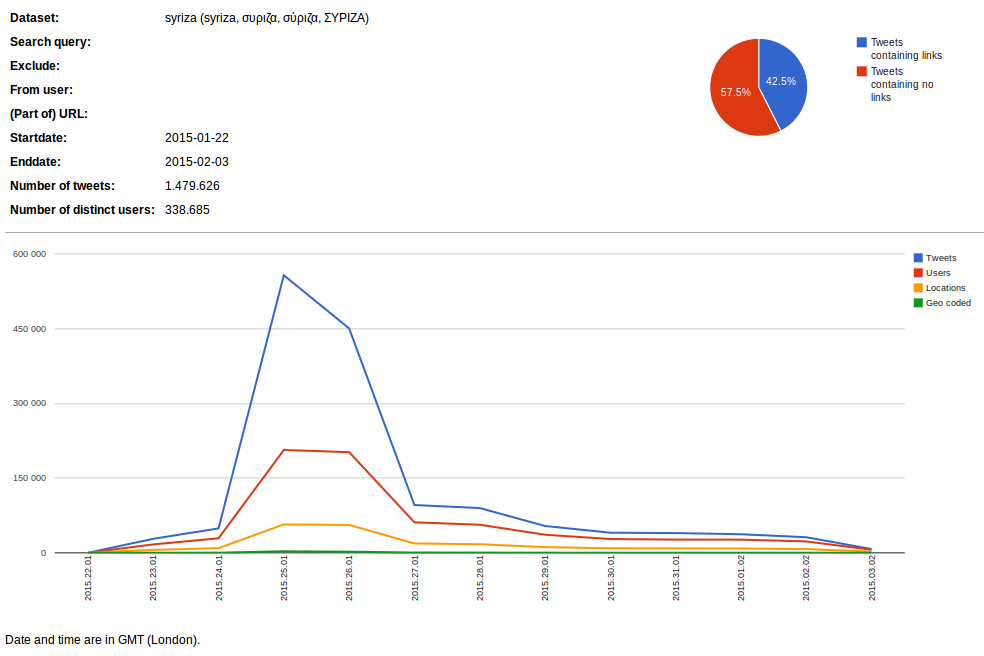 As it can be seen in the chart above, the results that were announced in the evening of January 25, produced a gigantic peak of tweets containing the word SYRIZA. This peak lasted almost 48 hours and was followed by a significantly long tail. In total between January 22 and February 3, almost 1.5 million of such tweets were produced by 338,585 unique users. The graph of the network around this term reveals the most committed groups of users. To better understand the effects of the SYRIZA win on the level of interest on Greek elections, I conducted an analysis throughout two periods, one preceding the vote, and the other following it.

The network of SYRIZA before the elections

The first period covers the last week of the election campaign and runs from January 17 to 24. The number of tweets (76,999) and users (30,426) is relatively low signifying a real but limited interest. However 57.3% of the tweets contain a link, indicating that they intend to sharing online information. The analysis of the network is quite revealing of the main protagonists.

Unsurprisingly in the heart of the graph lie the official accounts of SYRIZA and its leader Alexis Tsipras. But the most mentioned account is that of Pablo Iglesias, leader of Podemos, the Spanish party with close ties to Syriza. This observation confirms the proximity between the two leftist parties on Twitter that I had already spotted during the European elections campaign in 2014. This proximity resulted in the presence of Pablo Iglesias at the last meeting of Tsipras in Athens on Thursday before elections. 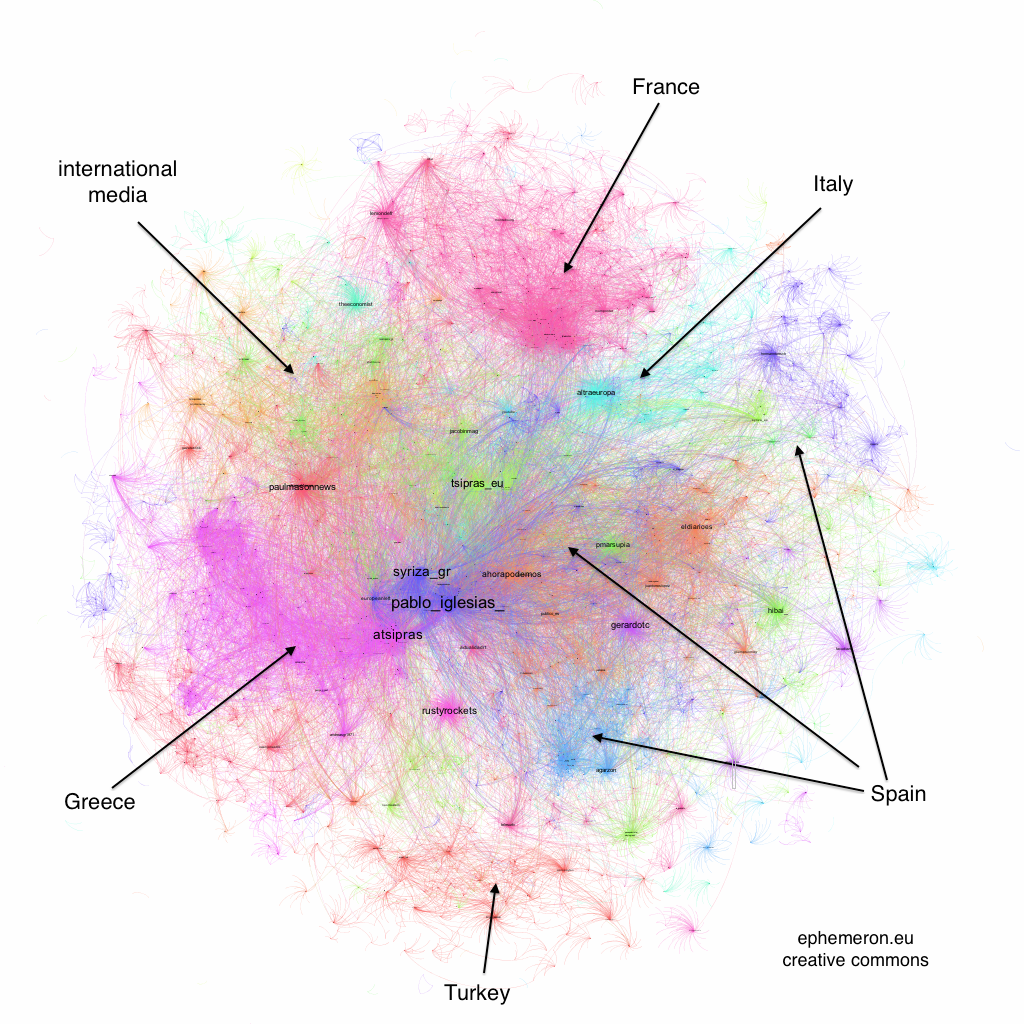 Network of mentions containing SYRIZA between January 17 and 24

Explanation of the graph: the dots represent Twitter accounts that produced a message containing the word SYRIZA. The lines between the dots represent the interactions between these accounts (RT and mentions). The topology of the graph is the result of the intensity of interactions between accounts. The more two accounts are characterized by an intense two-way communication between them, the closer they are on the map. Dot size (smaller to bigger) depends on the number of mentions and RTs received. The colour depends on the community to which they belong. The data was collected with DMI Twitter Analytics. The graph was made with Gephi using the Open Ord algorithm.

It is probably the first time in EU history where two political parties in different countries and their militant bases are networked at that point on online social networks. This is undoubtedly a force that has had a beneficial effect on the campaign of Syriza. Alberto Garzon, the leader of Izquierda Unida, the other party of the Spanish radical left is also present in the network but to a much lesser extend.

The interest of Spaniards about SYRIZA was not limited to the networks of Podemos and of Izquierda Unida. Several other accounts from that country were important nodes of the SYRIZA network during the campaign. This is true of progressive media such as Eldiario and Publico, journalists like Gerardo Tecé and Hermann Tertsch but also simple citizens like Alberto Sicilia, a physicist and blogger,and Hibai a DJ. Each one of them had a real impact on the dissemination of information around SYRIZA in Spain.

Two other very important nodes in the network were British: journalist Paul Mason from Channel 4 and media personality Russell Brand. Each of them brought together a large number of accounts interacting around SYRIZA. But if Russell Brand interacts with a group off from the rest of the SYRIZA network and mostly of British origin, indicating that it is his own fans, Mason has a much wider impact, involving many different groups. Presumably this is because of the credibility that the journalist has acquired on the subject throughout the years he has been covering the Greek crisis.

Another significant group is the French where we distinguish representatives of the whole spectrum of the left that took part in the Paris meeting in support of SYRIZA: Parti de Gauche (Mélenchon, Corbiere), Ensemble (Autain) PCF (Laurent), Nouvelle donne (Gaccio), the left wing of the Parti Socialiste (Hamon, Montebourg). Can be also noted the significant presence of mainstream media such as Le Monde, Libération, Les Echos and alternative media such as Reporterre and Mediapart as well as individual journalists like Michel Soudais, Edwy Plenel and Michel Mompontet.

Finally, two other important, but smaller, national/linguistic communities are those of the Italians and the Turks. One should also note the high activity on the topic of two Anglo-Saxon media that are situated politically in opposed poles: The Economist and Jacobin, a magazine that is located to the left of the American left. If the former concentrated on economics and mainstream politics, the latter was very engaged in the conversation around Syriza staging interviews with Greek intellectuals of the radical Left like Stathis Kouvelakis and sharing information about Greek and european politics.

The network of SYRIZA after the elections

The analysis of the graph around the word SYRIZA after the elections is also interesting. Indeed, the victory of SYRIZA, although anticipated by the polls, came as a shock to many. Subsequently the new Greek government made some impressive announcements during its first week in office that triggered major political wrangling in Europe and beyond, attracting the attention of the media and the public. And within seven days following the day after the election, the number of tweets containing SYRIZA had increased fivefold compared to the week before to 396,000 tweets by 137,000 distinct users. This time, only 51% of the tweets contained links, meaning probably that there was proportionally more comment and discussion than before the elections. 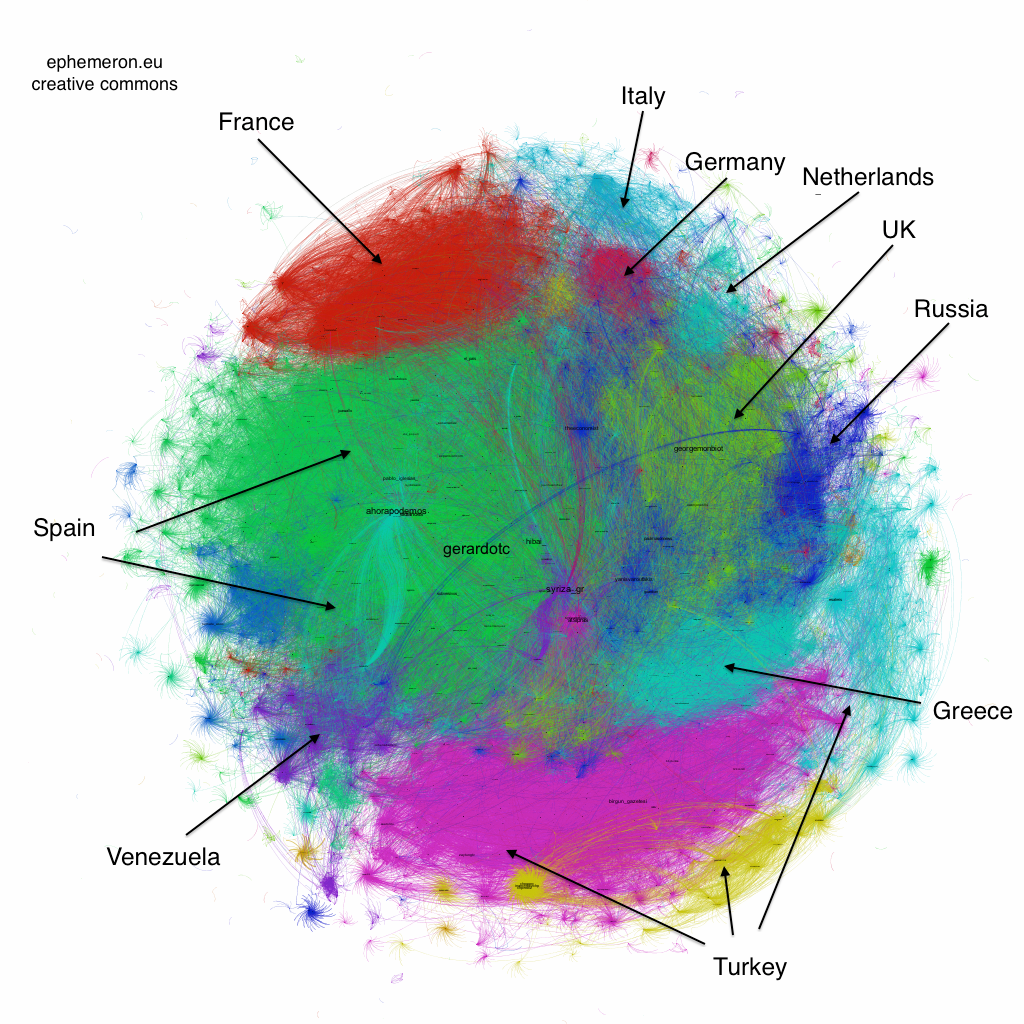 Network of mentions containing SYRIZA between January 27 and February 3

This explosion of tweets, and hence of interest in the subject increased the number of countries involved. The Spaniards continued forming the heart of the graph, being the largest and among the most highly interconnected groups. The French also remained in the continuity of the campaign as well as the British, who saw the emergence of a new central node that of the Guardian journalist and environmental activist George Monbiot who was extremely active after the elections.

However the interest for the Greek elections and the victory of SYRIZA exploded in Turkey whose users have made at least three large interconnected clusters. Geographical proximity and traditionally complicated relations between the two countries have certainly played a role in this. But it may also be the result of the parallel political trajectories in recent years, including a violent crackdown on popular mass movements in both countries that pushed Turks to rejoice in the victory of SYRIZA.

Another important community to appear was that of the Russians whose interest was probably awakened by one of the first initiatives of the Greek government, which was to block a resolution calling for tougher EU sanctions against Russia because of the conflict in Ukraine. On the other side of the globe, in Venezuela, a large number of users also expressed themselves after the victory of Syriza, led by Chavez sympathizers with whom the Greek party has close ties.

Northern Europe was finally interested in the Greek elections with two clusters one German and one Dutch. The latter is probably formed after the eventful visit to Athens of Jeroen Dijsselbloem, Minister of Finance of the Netherlands and President of the Eurogroup. He was hosted more than coldly by the new Minister of Finance of Greece Yanis Varoufakis who otherwise, has also emerged as an important node in the graph after the elections.

The social media, a longterm investment for SYRIZA that paid off

In conclusion, the coverage of Greek elections on Twitter was completely disproportionate comparing to the size and importance of the country. It echoed much further than Europe, as far as South America, the USA and Russia. The networks that formed were based mainly on political homophily (Spain, France, Italy, Venezuela), but also empathy (Turkey), interest for some particular issue (Russia) or curiosity (Netherlands and Germany).

SYRIZA and its leader Alexis Tsipras succeeded in trending on Twitter because of the political context but also because they were early adopters of the medium. Indeed Tsipras gave his first web only interview to Greek bloggers and Twittos as early as 2008, when his party’s electoral force was only around 4%.

Being extremely badly treated by mainstream media it was an occasion for him to get directly in contact with a very dynamic and influential part of voters, the one of “digital opinion leaders”. Tsipras repeated successfully the Twitter interview through the hashtag #asktsipras in January 2015. As Mihail Batikas showed in his analysis (in Greek), the hashtag produced tenths of thousands of tweets from around the world.

On an international level, the social media team of SYRIZA reactivated international networks that they formed during their very successful social media campaign for the 2014 European elections. It seems that this kind of “online solidarity” movement gradually evolves in real life political contacts and networks of the radical Left throughout Europe.

Below the cult video of extracts from the first web only interview of Tsipras on Radiobubble in 2008. A young man in his early thirties that was meant to take power in Greece at ease among social media geeks