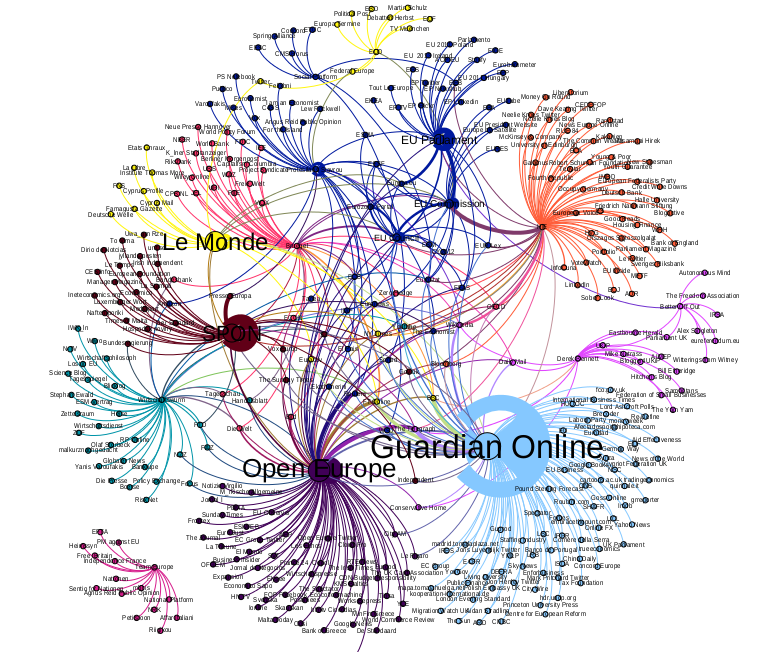 Hyperlink network between the websites of the thesis sample

Last week I acted as external examiner for the thesis of Dennis Nguyen at the University of Hull in the UK under the supervision of Athina Karatzogianni. Here I will give some feedback and thoughts about this very interesting work.

Dennis Nguyen decided to address a very complex but at the same time exciting subject. One can summarize it in the following two-fold question: did online communication on the EU and its crisis condense into something like a digital public sphere? If yes what were the discursive frames, the interaction dynamics and the main communicators and how all this functioned together? The first part of the question is kind of a rhetorical one, even though one has to demonstrate empirically the validity of the hypothesis. The second question is nevertheless crucial in order to understand the evolution of the European public space since the eruption of the financial and economic crisis. Considering the current political and socioeconomic tensions of the European Union, its sustainability is not guaranteed. Understanding the foundations of these tensions through an analysis of a variety of public discourses on the matter is politically necessary and scientifically extremely demanding.

From a theoretical perspective the main innovation of this thesis is the pertinent combination of elements coming from different approaches of the public sphere with conceptual and methodological tools of the research tradition of framing, put in a genuinely transnational perspective. Reading Dennis’ work I discovered the web sphere model of Schneider and Foot (2006) which, in my opinion, is a perfect framework for the subject. Indeed, contrary to the normative conceptualisation of the public sphere as something pre-existing specific issues and debates, the web sphere approach insists on the ad hoc nature of mediated spaces for public discourse that are delimited by a shared topical orientation and temporal framework. This is very important in the context of digital media because of the volatility of discourses and interactions that are engaged upon specific stakes by a variety of players that spill over traditional arenas of confrontation such as national mainstream media. What is also remarkable in Dennis’ work is his continuous effort to place himself on the right distance from the Habermassien normative model of the public sphere. In this respect, the contribution of Niklas Luhmann’s systems theory is fundamental.

From a methodological perspective Dennis’ work is also well constructed and carried out. Enriching the framing approach, that is identifying dominant frames in the sample and linking them to specific communicators, with the study of the network structures that emerged in the European crisis debate was a very good idea. Again, this adaptation of the conceptual tools of framing to a highly dispersed but also interconnected environment such as the web is necessary. Another point that is particularly salient is the fact that Dennis’ sample is not limited to mainstream media, something that is a usual bias in media studies. Indeed, on the web the public is not only confronted to journalistic discourses but also to a variety of institutional and alternative sources (governments, institutions, think tanks, bloggers) that have to be taken into account in the analysis of web spheres.

But the major contribution of this thesis is the empirical results. Indeed there are numerous extremely interesting conclusions that can be drawn from Dennis’ work.The first empirical result is of course the convincing demonstration that a EU- or EU crisis-web sphere emerged in the years 2011 to 2013 as a result of a discursive convergence across online platforms but also across the political and geographical spectrum. From this perspective the crisis transformed into a unifying element which made communicators in the sample discuss the same general sets of issues, and thereby focus on the same spectrum of involved actors and nation-states.

The EU crisis and its numerous faultlines

The second important empirical result is the fact that the EU and the crisis debate are a field of crystallisation and overlapping of numerous faultlines (Europhiles/Eurosceptics/Europhobes, Austerity partisans/Keynesians stimulus partisans, those who think the most important thing is not to encourage moral hazard/those who think solidarity inside the EU should be above all, North/South, Left/Right) and conflictual stakes (economic policy, immigration policy, political integration or sovereignism) that, as Dennis points out, must not be seen as separated but rather closely interwoven areas that were mutually affective and formed an integral part of the overall crisis debate. Also, paradoxically, the materialisation of the conflicts alone is evidence for the shared context in which many Europeans live and work; it implies a constantly increasing mutual affectivity between European political and economic systems.

Aside from this positive development, that is the consolidation of a European public arena of debate, Dennis Nguyen observed also negative trends. The first is that this public arena is far from being comprehensive. On the contrary, his work showed convincingly that, at least in the examined sample, there is over-representation of legitimate communicators and of discourses in accordance with the dominant ideology: representatives of the EU Commission, the EU Council, the EP, the ECB, national governments, German outlets (Bild, Spiegel), economy-focused newspapers (Handelsblatt, The Financial Times) and mainstream broadcasters (BBC, ARD). Alternative media, academics, social movement representatives etc. were at best marginalized or completely excluded from mainstream public expression. As Dennis puts it, protest movements in particular “were depicted as some sort of faceless, uncontrolled occurrence or disruption not unlike a natural disaster”. Consequently the group of power players and decision-makers who determined the course of the discussion was relatively small and homogenous.

So the battle engaged around the notion of “reforms”, that became a central device in framing strategies, was easily won by those that meant reforms as spending cuts and market liberalisation. As Dennis puts it “Austerity/fiscal discipline and growth-oriented, market-friendly reforms were heavily contested but ultimately prevailed”. Finally, another negative trend of this particular web sphere is that, through the crisis debate, cultural faultlines emerged that were maintained by oversimplified correlations and attributions of responsibility based on stereotypes. This provided easy answers to complex questions but also mislead some commentators to condemn what they perceived as coherent social and cultural units, i.e. entire peoples. This can easily lead to cultural or even ethnic explanations that can foster xenophobia (the campaigns of Bild against Greece, but also the violent reactions in Greece against Germany are good examples of this trend). Online media paid a central role in these processes. On the other hand the official EU online platforms hardly commented and/or denounced this problem.

One thought on “The European web sphere during the crisis: a critical perspective”