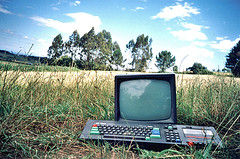 One of the major issues in Internet regulation is the question of intellectual property. Indeed the development of peer to peer networks worldwide and the rising threat of mass scale piracy on the Internet, that has been put forward by the industry of content, call for debate. The central question in this matter can be formulated as follows:
How can copyright holders be paid by consumers for music, image, film, software or text in a non rival economic environment such as the one of the Web without any prejudice for fair use of this content?

The general regulation tendency on this issue in the United States as well as in the European Union is one that seems to be transposing offline economic principals to the online context. Both the Digital Millennium Copyright Act (DMCA) and European Union Copyright Directive (EUCD) –as well as implementation of the latter in country members national law such as Droit d’auteur et droits voisins dans la société de l’information (DADVSI) in France– intend to raise barriers to free circulation of information on the Internet. The purpose of these regulation measures is to restore control on informational goods online distribution. This not only by severely condemning infringement of copyright but also by criminalizing production and dissemination of technology that can circumvent measures such as Digital Rights Management systems (DRMs), taken to protect copyright. And yet, DRMs, as it has often been pointed out –(FARCHY, 2004), (FETSCHERIN, 2002)– raise questions about their compatibility with fair use such as interoperability, conservation beyond hardware life limits, use in private and family circle, public use by libraries etc. At the same time, surveillance of peer to peer networks seems to be resulting in systematic private life violations. These collateral effects of the fight against piracy on the Internet have raised protestations on behalf of consumer associations, public library representatives, free software users and cybernautes in general[1].

This controversy illustrates the gap that separates intellectual property regulation, which has been largely imposed by the content industry, and social use of symbolic goods. The latter is a complex cluster of interactions between buying, lending, exchanging and copying that has matured over time and through progressive adoption of technological innovation by the public. Such practices have always been part of the cultural industry’s evolution, even if major players have been reluctant to accept them. On the one hand fair use of symbolic goods participates in the construction of collective identity of social groups and on the other it allows the process of matching, between offer and demand, in a market intrinsically characterised by uncertainty (GENSOLLEN et al, 2004).

However, alternative proposals concerning intellectual property regulation on the Internet do exist such as Global Licence, an amendment proposed by French deputies in the DADVSI law, which finally was not adopted[2]. Naturally, this proposition asks for a reliable measurement method of the quantity of films, songs, books, photos in circulation on the Web as well as the identity of the copyright holders. Such a system could be based on a Uniform Resource Number (URN) that would allow quantification (Le Crosnier, 2006). Other alternative systems of dealing with intellectual property on the Web such as Copyleft or Creative Commons, originated from the free software movement, have emerged. However, in the actual state of Internet regulation such heterodox propositions are far from being taken into account by legislators who, under the pressure of the highly concentrated content industry, tend to privilege repressive solutions.

Stakes of such a debate are high because they concern the future development of the cultural industries and the balance between market interests and social welfare in the dynamic environment of the Web. In this respect, regulation of intellectual property in the digital world is an utmost political matter, more than it is a technological or economic one. As such it should be treated equitably in an institutional framework that reinforces the democratic role of social stakeholders representatives (consumer associations, internet users, public interest organisations and ONGs) in order to avoid the actual gap between social use and internet regulation.

[2] It proposed that users should pay a legal licence trough their Internet Access Provider (calculated as approximately 7 euros per person and per month) in order to gain free and legal access to the content circulating in all exchange peer to peer networks. The copyright holders would then be paid proportionately to the demand, on the basis of a system close to that being implemented for broadcasting music on the radio.